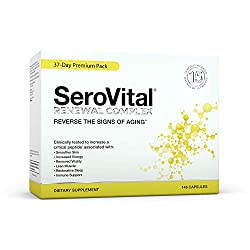 SeroVital is the product of choice for people who want to boost human growth hormone (HGH) naturally – some call it the fountain of youth hormone. Maybe you’ve seen the commercial with the star of Bold and the Beautiful, Kim Douglas? The company claims the supplement is clinically tested and protected by 15 patents. But despite its popularity, you may wonder if it really works? Can it reverse the aging process? Is growth hormone really the hormone of youth? In this review, you will learn more about SeroVital’s ingredients and research to help you determine if it is safe for you. The reviews are good, but to really know if it is a scam or not, you need to know about the clinical trials of this supplement.

The intake of 4 capsules will bring you the following ingredients

What does it all mean?

The supplement consists of a patented blend of 6 ingredients. The first 5 ingredients are amino acids. The sixth ingredient (Schizonepeta) is a herb. SeroVital’s 6 ingredients represent up to 2.9 grams (2,900 mg). Although the specific dosages of the 6 ingredients are not listed, since lysine is listed first, it makes up the majority of the proprietary blend. Schizonepeta does the least of what’s on the last list.

Here is a video about some of the ingredients in SeroVital.

The supplement does not contain human growth hormone (HGH). Instead of administering the hormone directly, SeroVital contains ingredients designed to naturally increase growth hormone levels. The ingredients that do this are called secretagogues. They are supposed to help you release the HGH hormone.  According to the company, these ingredients can increase the natural production of HGH by an average of 682%.

SeroVital holds 15 patents. Here they are, if you want to find them.

The company claims that the supplement is supported by 4 clinical trials. Unfortunately, the 4 clinical documents are not mentioned on the SeroVital website. Customer Service was unable to provide this information upon request. Here is a breakdown of the two surveys that can be found.

This study titled Growth Hormone 120 minutes of low dose amino acids in healthy volunteers was conducted in 2012. The results of the study were presented at the 2012 meeting of the Obesity Society. The following is a summary of the study

The study involved 16 subjects (12 men and 4 women) and was relatively simple. The subjects took SeroVital one week and a placebo the next. Researchers tested the level of HGH in the blood at different times to see if the hormone was elevated. They tested HGH 15 minutes, 30 minutes, 60 minutes, 90 minutes and 120 minutes after supplementation (or placebo).

What did they find? The researchers found that the average HGH level increased by a factor of 8.120 minutes (2 hours) after taking SeroVital. This corresponds to a 682% increase in greenhouse gas levels. We didn’t see him when people were taking the placebo.

While there have been good results, there are some things to keep in mind.

1 The study was not peer-reviewed. Instead, it was presented at the 2012 meeting of the Obesity Society. If it’s something good, it’s not the same as publishing a study in a medical journal.

2 This was a small study. Only 16 people were involved in this study. To be fair, there are also a small number of people in many other studies.

3 What does the growth of HGH mean? This study did not show that SeroVital fades wrinkles, burns body fat or builds muscle.

4. HGH was still in the normal range. Two hours after SeroVital administration, the mean (median) PG level increased from 0.17 ng/mL to 1.33 ng/mL. Normal HGH levels in adults can range from 0.4 ng/ml to 14 ng/ml in men and women. HGH levels rise, but people stay within the normal range. Strangely, growth hormone levels were lowered in those who took placebos.

This study was presented at the 2019 annual conference of the Endocrine Society. Here, 45 60-year-old women and men with symptoms of low normal HGH levels received SeroVital for 24 weeks (6 months). They haven’t changed anything else. The only difference was that they were taking a supplement.

What did they find? Insulin-like growth factor-1 (IGF-1) is the molecule responsible for most of the effects of growth hormone. Researchers found that IGF-1 levels were elevated when people took the SeroVital supplement. It has also been reported that people have lost weight, feel less stressed and show improvement in cardiometabolic markers.

1. This is not a peer review. This study also appears to have been presented at a scientific conference. This is not the same as peer-reviewed research, which is reviewed by other scientists before being published in a medical journal.

2 There was no placebo group. SeroVital should be compared to a placebo.

3 Did they measure the level of HGH? The press release about this study stated that the individuals had symptoms of low normal HGH levels. But have they tested for growth hormones to see if their levels are really normal? Maybe, but that’s not clear in the press release. They say IGF-1 levels are higher than at the beginning of the study, so maybe they are ….

It is possible that other tests may also be performed, but their location cannot be determined.

Can men use SeroVital?

There is no reason why men cannot use SeroVital. It can be used by both sexes. The two clinical trials summarized above involved both men and women. It should be noted that another supplement called Growth Factor 9 contains the same ingredients as those marketed for men.

What about SeroVital powder?

For those who do not like to swallow tablets, this supplement is also available in powder form. SeroVital Rapid Dissolve powder contains the same 6 ingredients as the original version in the same dosage. There is no difference between the powdered form and the capsules.

The business is called Sanmedica International, LLC. The business is located at 5742 W Harold Gatty Dr Salt Lake City, UT 84116-3777. To contact the company, call customer service at 800-435-1409. The other number is 801-517-7007. Although the company is not accredited by the Better Business Bureau, it has received an A+ rating. For more information, see the BBB brochure.

Where can I buy SeroVital?

Because the app is popular, you can buy it at many places, such as Ulta, Vitamin Shoppe, GNC, Walmart, CVS, Walgreens, Kohls, Costco Wholesale and Target, as well as many other stores. You can also get it on eBay and Amazon. Look around to get it at the best price.

How much does SeroVital cost?

The bill is not cheap. Here are the prices on the official website:

And also on the Amazon.

How do you record?

For best results, the manufacturer recommends taking SeroVital on an empty stomach and not eating for at least 2 hours. So you can take it in the morning and then not eat for two hours, or in the evening at least two hours after your last meal.

Side effects of SeroVital

So the Serovital is safe? Most of the ingredients are amino acids that are easily found in food. Therefore, it is unlikely that most people will experience any negative effects from using this supplement. However, there are some considerations and precautions that should be taken here. This list may not describe all possible side effects. Please consult your doctor for the best advice.

Can SeroVital raise my blood pressure?

There is no evidence that SeroVital increases blood pressure – systolic or diastolic. It is useful because it contains arginine and lysine. Arginine is a well-known vasodilator due to its ability to increase nitric oxide levels. Some studies also show that lysine can lower blood pressure.

Does SeroVital cause cancer?

Growth hormone (and IGF-1) causes cells to grow. Is it possible that HGH can increase the growth of cancer cells? Maybe. Some studies have linked HGH therapy to colon and breast cancer. While more research is needed, it is important to remember that taking human growth hormone (the drug) is not the same as taking amino acids that increase growth hormone levels.

Let’s get one thing straight: There is no evidence that SeroVital causes cancer. Due to the lack of research on this topic, people with cancer are encouraged to ask their doctor for the best medical advice on the subject.

Can SeroVital cause weight gain?

None of SeroVital’s studies have shown people gaining weight with this supplement. So far, it can probably be assumed that the drug does not cause weight gain. None of the ingredients in the supplement lead to an increase in BMI or body fat. On the other hand, studies have not shown an increase in muscle mass either.

Although a study by SeroVital reports that people have seen their weight improve, some online journals say it hasn’t worked. Further research is needed to definitively determine whether or not this supplement is effective for weight loss. 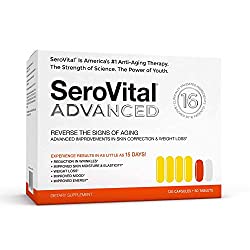 There is an extended version of this application. The main difference between SeroVital Original and Advanced is that the Advanced supplement contains additional ingredients such as collagen, konjac fibers, hyaluronic acid and green coffee extract. For both supplements, you should take 4 capsules per day. There are morning and afternoon tablets. The advanced supplement contains a number of ingredients. Check out the advanced SeroVital review for an in-depth discussion.

The GenF20 is another popular addition to the HGH booster. They have one thing in common: they both contain the amino acids arginine, lincine and glutamine. But that’s where the similarities end. GenF20 contains a number of other ingredients, including Tribulus Terrestris and antler velvet. Just because GenF20 contains more ingredients doesn’t mean it’s superior. Unfortunately, no studies have compared these supplements.

Pros and cons of SeroVital

There is no doubt that this supplement has been studied to increase growth hormone levels.  For those interested in biohacking to get higher levels of this so-called youth hormone, that may be enough. But even if this is the case, does that mean SeroVital can smooth out wrinkles, improve mood and energy levels, or increase bone density and muscle strength? That’s certainly an idea, but more research would need to be done to be sure.

Here it is if you want to see what others are saying.

What do you think?