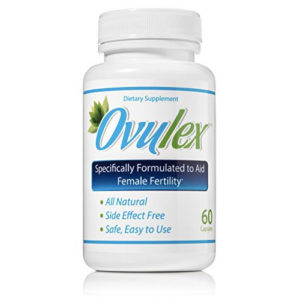 If you are trying to conceive naturally, it is important to make sure your body is getting all the vitamins and minerals it needs to keep your reproductive system healthy.

Despite what you may think: I eat healthy, many women and men are actually deficient in the essential nutrients they need to conceive a healthy baby.

Therefore, there are many dietary supplements available today that aim to improve your reproductive health and help you conceive naturally.

Today we are going to look at one of those female supplements called Ovulex. This is a special blend of herbs that is thought to increase the chances of pregnancy.

In this issue of Ovulex, we take a closer look at the formula and explain what we think it can do.

A bottle of Ovulex costs $47, contains 60 capsules and lasts an average of one month if you take two capsules a day.

Those looking for this product can buy it from Ovulex’s official website, as well as places like Amazon.

Ovulex seems to be marketed mainly to women who are looking for something that can help them get pregnant naturally. Selmedica itself describes the product directly as a mixture of plant substances, which is the result of international research carried out by many universities, scientists and doctors over the past two decades.

In fact, based on several studies we have found, we believe that Ovulex may contain certain ingredients that are not safe for women trying to conceive.

The ingredients used in Ovulex are mainly herbs used in folk medicine to treat infertility.

However, we have tried to find studies that confirm their effectiveness – and we have found several that reveal the dangers of consuming some of these ingredients.

Dong Kwai is another herb found in supplements, but we’ve also had trouble finding reliable data to support its efficacy. In traditional Chinese medicine, it is used to nourish the body, treat menopausal syndromes and reproductive problems.

According to WebMD, it is not recommended to eat dong quai during pregnancy because it seems to affect the uterine muscles. However, there seems to be no data to know if Dong Quai is really effective for women trying to conceive.

Black cohosh, a native herb found in the United States and Canada, is another herb used in Ovulex. Although black cohosh is approved in Germany as an over-the-counter medication for the treatment of premenstrual discomfort, nervousness, and menopausal symptoms, we have found no studies showing its effectiveness in improving your chances of becoming pregnant. It is not yet known how black cohosh works, making it difficult to determine if it may be beneficial to the reproductive system.

Red clover is the ingredient of most concern. Red clover is an herb traditionally used by midwives to support reproductive health, but it can also cause reproductive problems. According to WebMD, this can cause spotting in some women, which doesn’t seem very encouraging. According to the National Center for Complementary and Integrative Health, research on the effectiveness of red clover actually shows that it does not relieve the symptoms of menopause. Because red clover contains compounds that contain estrogen, long-term use of it in women may increase the risk of endometrial cancer.

On the other hand, the preparation contains cranberries, which are used for the treatment of certain gynecological hormonal disorders and menstrual disorders. However, the data on its effectiveness are also weak.

Conclusion: We believe that there is not enough research to support the effectiveness of Ovulex as a supplement for women who want to become pregnant. It is interesting to note that the manufacturer describes the product as the result of international research conducted by many universities, scientists and doctors over the past two decades. We have tried to find studies that show the effectiveness of herbs to help you get pregnant. Not only are there no studies showing positive results, but some of the ingredients may even be of concern.

Advantages and disadvantages of the Ovulex

We’ve listed below everything we like and dislike about this product:

What are the ingredients of Ovulex?

We found the following additional facts about this product. Ovulex contains a mixture of herbs (500 mg), but the dosage of each ingredient is not known.

We believe that Ovulex is likely safe for other healthy consumers when used according to the instructions, but some users have reported negative side effects from using Ovulex. In addition, some ingredients have been linked to an increased risk of cancer.

The ovule also contains certain ingredients that are banned in some countries, such as B. Meadowsweet.

It contains nothing that is officially prohibited or considered unfit for human consumption.

Is the ovulex suitable for everyone?

Pregnant or breastfeeding women should not use Ovulex because many ingredients are dangerous.

We also do not recommend it for people under the age of 18.

If you have health problems or are taking prescription medications, we recommend that you show the ingredient list to your doctor before using. Reliable data does not seem to be available about many ingredients, so you should consult a doctor before using the supplement.

Are there any customer reviews for Ovulex?

We found the following reviews about Ovulex online from customers:

I have used this product before – and it helped me get pregnant. I’ve tried everything to get pregnant. I checked my temperature daily to find the optimal time; I did ovulation tests every day for almost 2 months; I went to doctors; my husband did tests; I did everything I could imagine without losing my mind. At some point I heard about Ovulex – and I was skeptical at first, but I wondered what else I could lose. So I bought Ovulexa and Ambrose (for my husband). A month after I started using this product, I was pregnant. After almost 4 years of effort, I finally did it. I had no side effects – and now I have a healthy 4 year old child. I know it won’t work for everyone, but I think everything is at least worth a try.

I’ve been trying to get pregnant for over a year. After taking these supplements for 3 months, I finally got pregnant. I think the Ovulex helped a lot. Now I have a healthy little girl!

I have been using these supplements for two months now. But I am very disappointed with the result. Even on the first bottle, I felt a severe backache and I ignored it, thinking it was from driving. With the second bottle, I continued to have severe back pain, but when I stopped taking the Ovulex, the back pain disappeared. And I’m still not ovulating!

Our final verdict on the Ovulex

In concluding our review of Ovulex, we believe that there is a lack of research supporting the effectiveness of Ovulex as a supplement for women who wish to conceive.

Although the manufacturer describes the product as the result of international research conducted by many universities, scientists and doctors over the past two decades, there seems to be a lack of research proving the effectiveness of the ingredients used.

However, we have found studies that show that some ingredients can indeed be a source of concern.

In summary, we believe that you should be extremely careful about taking herbal supplements while you are trying to have a baby. Ovulex uses plants that midwives have used and trusted for centuries, but the lack of clear and reliable data on their effectiveness leaves us in the dark.

ovulex plus,  ovulex pills walmart,  ovulex tablets,  ovulex price philippines,  ovulax,  how much is ovulex in nigeria,  what is ovulex used for,  ovulax herbal